Tracy Roth hits the trails–and the keyboard–once again for a ripping race review of the 2018 Substance Projects Fat Turkey, presented by Cannondale.

Tracy is wickedly cool.  She’s fearless, boss, and never hesitates to bring it.

I’m a jerk.  She was hoping to see me last year at her first fatbike race ever (the 2017 Fat Turkey), and…I wasn’t there.  It wasn’t like she needed me there (fearless), but as a pal, I should have been there (jerk). Worse, that race had THE WORST BIKE RACE CONDITIONS EVER.  Like ever (although writing that I think I remember a few pretty bad race days too).  The 2017 Fat Turkey, was a 17k lots-of-hike-a-bike, slosh.  Not ideal.  However, not only did she not complain, she slogged it through until the end, finished in just under three hours, and signed up for the next race.

I also let her down in her first MTB race.  Yay.  Jerk indeed.  The 2018 Homage to Ice was my chance to redeem myself with Tracy, but it was also my first ever DNS.  Icy road conditions grounded me at my home in Scarborough while she skate-walked her bike through a treacherous course.

Fortunately, we had the chance to race together in between those two races, at the Hardwood Fatbike Race last March.  Then, we went to the Flashback Cafe in Barrie with Dan Marshall, and ordered the menu.  Like, the actual menu.  Pancakes, poutine, open faced sandwich, waffles… 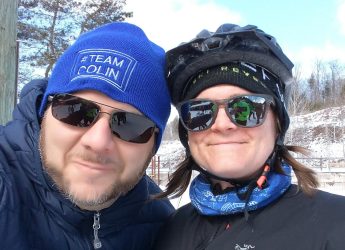 Can I just say, I love my Fat Bike?

I mean, I love my other bikes, but I LOVE MY FAT BIKE.

There is just something about it.  It makes me feel like a kid again, nothing serious, just pure fun.

The Fat Turkey 2018 was the first race in the 45NRTH Ontario Fatbike Race Series, presented by Cannondale and Substance Projects.

On Friday morning, the day before the race, I was concerned.  It was raining, a lot.  I was worried about a squishy, rutty, muddy, mess, and spent the day constantly checking the Instagram.  I was assured the conditions would be great, and it was a lock to be the opposite of last year (when the heavy wet snow made for 10km of pushing my bike, compared to the 7km of riding I did, with an unimpressive finishing time of 2:54!?)

Given the conditions, my goal this year was sub-2 hours. Initially, the weather looked to be warm, but on the day-of, it seemed to be hovering around the freezing mark.

The course was, in one word. Awesome. Fast. Flowy. Solid.

From what I recalled from last year, there were a few roads at the start, giving the opportunity for some passing before settling into position.  The race started, and I counted 5 girls as I passed them (and from what I recalled there were only 8 registered) Could it be?  Could I actually be in a podium spot?  It was unlikely, but I held onto that dream, speeding up when I caught a glimpse of a girl ahead of me, or when I saw one of the girls catching up behind me.  At one point I was just behind the girl ahead of me, but she easily lost me on the road section.

I rode hard through the single track feeling great!  I was cautious on the ice, but pushing through the dirt sections.  I was feeling good!  The outcome wasn’t everything, but it sure would be nice to see the podium!

Alas, I finished the race in 5th (of 11 women).  It was average, but the real win was finishing in 1:24, crushing my sub-2 hour goal, and killing my nearly 3 hour time from last year!  I was stoked!

I had a great day on trails, and once again learned more about myself.  I registered for this race knowing nobody.  A few years ago, I would never have dreamed of doing this.  But over the past few years, starting with the King Race Series, I’ve starting getting out to MTB events, knowing I am not fastest, but with a goal of pushing my limits, and having fun.

Next Up:  the Albion Fat Bike Festival, on January 12, 2019.  The Poker Run was a Highlight of the Seasonlast Year!

I hope to race this weekend too.  It’s been a different winter season for me this year.  I’ve nailed a few rips on my cross bike, and hit Joyride 150 a few times, but with family obligations and other stuff, it’s sometimes hard to get out for a ride.  Fortunately, it’s easy to eat and laze around the house.  Wait, that’s not a good thing…

Friends Of Team Colin Submissions:
Once again, if you have something to share, either as a post, or just a message, I’d love to hear it:

Send your words and a few pictures to: TeamColinBlog@yahoo.com

Blog post #110 is live. It's a look FORWARD. El Bandito 2020...2021...
Summer Epic 8 Hour canceled. Aw dang. Blog 109 is live! www.teamcolinblog.wordpress.com
Check it out...gears. I know eh? Who knew. I haven't ripped my hardtail in about a year. Sweet ride!
P2A sharing a bit of TC love on the Facebook. Nice.
Another beauty day. I could ride the SSL every bloody day.
Beauty. Night. That is all.