Also, slow clap, because no kidding, no fooling, and noo doot aboot it:  nice work  Okay, we don’t actually say “noo doot aboot it”, but the inaugural Sea Otter@Blue Mountain was a beauty (because we do say that). 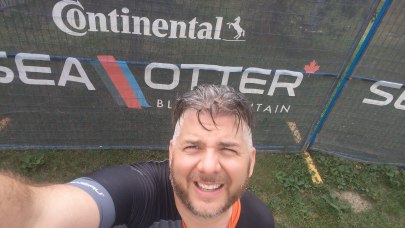 Also, your tagline “…because Sea Beaver was taken” is a seriously great line.

Okay, bad news.  Sea Otter @ Blue Mountain wasn’t the Sea Otter of Laguna Raceway in Monterey California.  You know, the one we’ve always read about with a billion bike minded people (pros and schmoes), and all those reveals of cool new bikey gadgets and gear….and, you know, the world’s premier cycling festival.

But I gotta say, it doesn’t matter, because they nailed it.  Sea Otter @ Blue was near perfect…for a first shot.

For cyclists, Sea Otter@Blue was exactly what it should have been (again, for a first shot): bikes, races, and bike stuff.  On the other hand, there wasn’t much of a return on paying twenty bucks to get into a dusty parking lot with not-so-many exhibitors, and portable toilets, that was waaaay too far from Toronto.  Let me qualify that.  I’m not Toronto-centric, but 2.5 hours away is a long drive from the largest city in the country, and to pay 20 bucks after spending a bucket of gas money is a bit much, especially if someone wants to bring a family (read: me), and it’s a good thing, because they would have been bored out of their gourds.  Now, after writing that, I realize it sounds a bit whiny, and I have to acknowledge the bossness of Blue Mountain–I mean where else could they have the breadth and depth of races and rides, especially the DH stuff?  Also, I realize that Monterey is almost a day’s drive from LA.

At least there was free-ish parking.  However, aside from a sweet Joyride 150 To Go skills section. and maybe a sample of Honeycombs, there wasn’t much for non-cyclists.

In the end Sea Otter@Blue was kinda like the Bike Show, but with races (although I would have loved to be part of some hype at a booth with something NEW).

And there’s the rub.  I kinda feel like I’m comparing Sea Otter@Blue to the Toronto International Bike Show–which is a no-brainer because it’s the only other thing to compare it with. That’s a good thing, and bad thing.  First, Sea Otter was waaaaaay different from the Bike Show/Sale (which seems to be showing its age lately…).  Second, um, Sea Otter had trails and roads and gravel and a mountain, compared to a concrete test track around the crowded concrete floor of the Better Living Centre in downtown Toronto…in early March.  It’s complicated.

People often gripe that the Spring Bike Show is just a big sale, but I think I would have liked the chance to buy some bike things–just not outdated helmets and off-size shoes…

I guess the qualifier is that one is a consumer show/sale,and the other is a festival, and that’s okay, because this post isn’t about the SHOW of Sea Otter (even though it was pretty great), it’s about the BIKE RACES of Sea Otter (which were absolutely great, noo doot–oh nevermind).

I’m MTB, so I chose the only mountain bike event:  The XC 3-HR.  I would have considered a gravel rip, but the races were on a weekday, and I couldn’t swing it.  Also, a Friday race?

For anyone who has read some of my other blog posts, this first line may sound familiar.

In case you’re wondering about my History of Race Lateness, here’s a brief look at some of my more spectacular late escapades:

Seriously, I was even late for a race once when I camped on site the night before–about 50 metres from the START line.

Wait, isn’t this a Race Report?

However, dude and lady behind the desk made it happen.  They were like buzzards on fresh roadkill.  Um, not the most flattering analogy, but I mean to say they were as FAST as buzzards.  Dang, still not flattering.  How’s this: dude and lady got me waivered, registered, chipped, wristbanded, paid, and plated in about 17 seconds.

It was nice to be staring down the barrel at a relatively short race, and I was looking forward to a quick rip…except the race started at the bottom of Blue Mountain, which is a mountain.  Seriously, it’s in the name.  Really, it’s not an actual real mountain, but when you have to climb up half of it at the start of a race, with cold legs, flat lungs, and zero stretching, well, it’s a big bloody blue wall.

The start climb, which I’m calling “The Sea Otter Gut Punch” was about 1k long, and climbed about a billion metres.  Ouch.

After the SOGP (see above), the course was a thing of MTB perfection:  crunchy singletrack, raw rips across a ski hill or three, a short but sweet nip at part of a DH run, and enough technical stuff to keep us on our toes.  Across the hill, up and down a bit, and then back to the START/LAP/FINISH (with another hill or two), for the next lap.

Lather, rinse, repeat, and 7 laps later it was all done.  Eight times up the SOGP, eight rips across the mountain, and 8 sustained bikegasms.  It was only a 3.5k loop, but Sea Otter packed a heck of a lot into that short span.  Blue Mountain has some seriously decent MTB stuff, and I’m looking forward to going back.

Thanks to Angela and Dan Elmsley, who were supporting their son, Nick, I was properly hydrated throughout.  Thanks also to the folks at Skratch for the sweet sustenance. 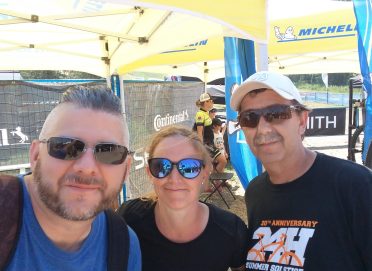 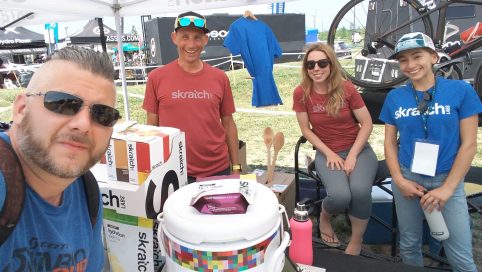 It even cooled a bit throughout the race.  At the start, it was overcast, hot and humid.  However, after the first 45 minutes or so, a gentle breeze was kissing our cheeks just enough to make it somewhat comfortable.  It was also at about that time I started to feel almost pre-warmed-up.  I wouldn’t actually be warmed up until my third last lap (no kidding), but that’s what happens to a slow dog in a long race.  By that time, I think I had another 8 laps in me, alas, the race was done.

Gotta say, it was nice to feel like myself again.  I’ll never be a great rider, but this season has been hell, and I’m finally back on track.

I was probably last place (didn’t check the results), but it didn’t matter because I got to play bikes at the inaugural Sea Otter@Blue (…because Sea Beaver was taken”…love it).  Also, I gotta talk to Nick about proper posture in a post race picture.  Dude is as cool as hell.

After the race, I chatted with the Elmsleys, and talked to Nick about his OVERALL WIN at the 24 Hours of Summer Solstice the week before.  I strolled over to the Norco, Smith, and Cannondale booths, to see a few pals, and then went back to my RV for a shower and a snack. 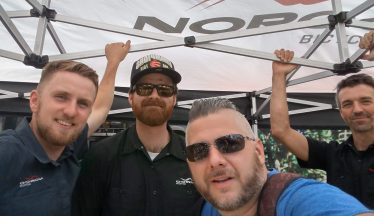 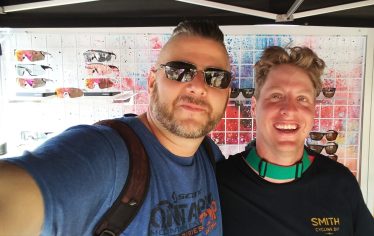 And then I was back at the expo for round two, plus some essential popsicle distribution, and more chatting.  Btw, I think I bombed through about a hundred popsicles.  Gentle solace for an expo in an unshaded parking lot.

Okay, so it wasn’t the Sea Otter I expected, but that doesn’t mean it wasn’t an absolute gem (see above re: bikey stuff, races, and people).  Also, it was Sea Otter’s first kick at a Canadian venue, and I am chuffed to imagine how big and awesome it’ll be next year.  In fact, inasmuch as I laid down a welcome mat for Sea Beaver, I’m also throwing down a gauntlet with a challenge to deliver a bigger expo, find something to hype, include some BMX and fatbike (and maybe even an e-bike race), and maybe add another dash of MTB.  Otherwise, the festival runs the risk of becoming a DH Symposium with some other bike stuff, which is cool, but it doesn’t fully embrace ALL disciplines.

The first Sea Otter@Blue was boss, and I can’t wait to see it grow.  Hey, maybe it’ll mature into a fully formed Canadian a Sea Beaver (totally a real animal)!

It's happening! At 1 PM today, go to www.MyQuiz.org and enter the code 056165 It's a Bikes and Bike Stuffs Quiz! Let's do this.
Okay, I'm doing something that is either really cool, or really dumb. I'm making an online quiz. After I create it, I'll post the sign-in info online, and people can take it LIVE. I'm aiming for noon one day this week (maybe even Hump Day), so I have to act fast. The problem is that I'm dumb, and don't know much. My goal is to make the quiz easy enough to have fun, but hard enough to have more fun, and I want to have questions that "anyone who races" will get really fast, or anyone who is a mechanic will get really fast, but not everyone will get everything fast. If you have a questions that you think are fun, or might stump people, send me a DM. DO NOT REPLY TO THIS (um, because people will see it). Also, when you send your question, send the answer (I'm dumb, 'member?). I'm thinking about questions like: What is an egg beater? What is the typical length of X race? Race questions, technical questions, trail questions, bike stuff... Gravel, MTB, fatbike, and BMX (because Drew Bezanson is totally my pal).
Checking out a formerly unused trail at Thomson Park today.
At @joyride150 with my pal Dan Marshall. Boom.
I posted a pretty complete 2020 Race Calendar on my blog, with most of the MTB, gravel, and fatbike races within an hour or so of Toronto, along with a bunch of links to organizers, races, weekly series, and even a few rides. Season 20/20 is going to be EPIC, and you don't need perfect vision to see that. www.TeamColinBlog.Wordpress.com
Reflections on this year's Bike Show: meh. That is all.